Today, I saw love in so many forms, particularly in respect to the love of children.  This day was an answer to my book, Boogeyman Dawn, which speaks of the horrors done to children, neglect and abuse.  While I met children who have experienced those horrors, I also saw them in places that attempt to shelter them and provide them with unconditional and limitless love.

Liz and I started the day with a breakfast of rice, chili paste, the local sweet bananas, eggs, and more.  I fear that I will not be able to fit through the door of my home on my return due to the amount of food that I am devouring here.  There have been such culinary delights.

At breakfast, Brother Damian met us.  He was to show us some of the Brothers works, particularly those that he directs or has directed in the past.  From the first moment of introduction, I recognized a kind soul with a large and open heart.  I was right in that, yet I could not know in that moment how magical and grand in life experiences Brother Damian really is.

Our first visit was almost immediately outside of the gates of the Provincialate, La Salle Preschool Colombo 15.  The small school gathered students together from Hindu, Buddhist, Muslim, and Catholic traditions.  We arrived just as the students were gathered together for their morning prayers, said in a combination of English, Tamil, Sinhala, and Arabic.  We saw the students as they had completed their Islamic prayers and then Catholic prayers.  It was absolutely beautiful.  Seeing these children with such light in their eyes brought both Liz and I to joyful smiles and appreciative laughter.  The teachers were so welcoming.  It was evident that they had a rapport with the students and with the parents who had recently dropped off their children.  In addition, being with Brother Damian was a true treat.  The children and teachers immediately began to smile at seeing him, rushing over from their work or play to greet him, tell them their news, and ask for his blessing. 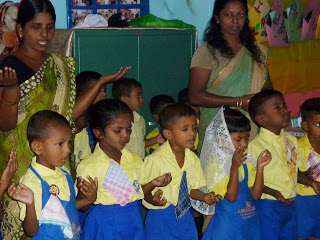 After the visit to Preschool 15, we went to the Lasallian Community Education School. There were rooms for rent for businesses, school groups, groups on retreat, both dormitories and meeting spaces with cafeteria services on site.  The facility is right by the sea with direct access to the beach.  Also on the site, is a building that is in the process of being built.  It will house, among other services, a bridal and embroidery training center for girls and office space for a number of nonprofit organizations as well as conference facilities.  In the same complex is Preschool Temple Road, which welcomes some of the poorest children.  There they receive a free education and are also provided meals throughout the day.  When we arrived, the children were singing their morning songs, songs in Sinhala and English, and doing their morning exercises.  Tomorrow they will have a field trip.

After the this short visit, we went to visit the Preschool Henamulla.  In this area, when there is flooding, families live in water that can reach as high as one’s knees.  The shanties are next door to a city dump, some of the residents sifting through the rubbish for items that worth money.  The area is hit hard by poverty, violence, drug addictions, alcohol abuse, and crime.  In the school, the students are taught in Tamil and Sinhala.  Liz and I visited all of the classrooms.  In each one, the students immediately rose and ran to greet Brother and us.  There were so many smiles and so many songs that the children wanted to sing to show us their talents.  We arrived on a day when they had just recently studied the tortoise and in many of the classrooms, the students were drawing what they had seen.

From preschool to preschool, we saw more and more poverty.  These children, these babies, I look like them and they like me, if only in coloring.  I can see myself in them.  I worry for their future.  While I saw so strongly how they are loved in school, they have so much to deal with at home, just in the passage from school to home and back again.  All parents love their children, I believe, but the poverty in which they live is overwhelming. 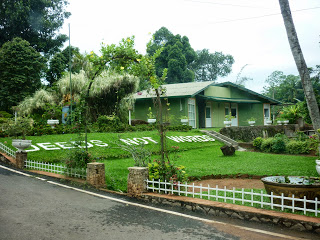 After this visit, Liz and I were taken to Boys Town, a site that houses boys from ages 14 to around 18 and up to 20, offering vocational training in such fields as welding, lathing, precision metal work, electronics, animal husbandry and agriculture.  The site was beautiful and purposed.  On site, there were even employers, renting space and providing internships for students.  There was also an organization called KID Care, which provides room, board, and an education for students who have no families.  One of the lessons I learned from them is how important it is to educate children in relation to their civic responsibilities.  At Boys Town, the boys had contributed to the cutting down of jungle to build community roads and the creation of the cross for the local basilica dedicated to Our Lady of Sri Lanka.  Brother Damian noted that, in his work, he tried to instill in the boys a connectedness to community, inspiring them to develop their own self-worth in seeing the impact of their work.  What a great lesson to take back to the schools in which I work, right?  While civic engagement is a goal, I think that schools can work harder to make sure that students feel themselves important parts of the school and local communities with the obligation of bettering those communities.

While at Boys Town, Liz and I also learned so much more about Bro. Damian.  There was the story about his pet leopard that he had for 7 years, or the time when he lived in a tree house on the property for two years in order to keep watch over the sheep, or when he chased four sheep bandits out of town for the good of the whole community, or the time a boy ran away from Boys Town and he found him under the bed in his mother’s house, or all of the adopted children he has around the world.  So many stories.

From Boys Town, Bro. Damian took us to the Basilica of Our Lady of Sri Lanka.  It was a gorgeous property, shared with many contemplative religious orders whose main purpose is to pray for the world.  He shared with us that there was even a priest within the area of the basilica who was also an exorcist.  Not many times that you hear that.  The basilica itself was beautiful.  Like other holy places, we were instructed to take off our shoes.  There were many people praying to Our Lady and also to the Cardinal buried there whose case has been taken to the Vatican for possible beatification.  I prayed for my grandmother’s health and for my own. 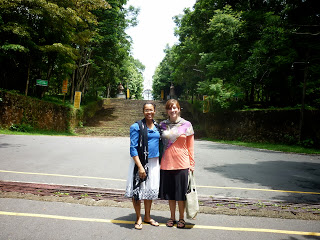 After the Basilica, we were off to De Mazenod College.  Bro. Damian had once been a student there.  We arrived as the whole school of over 4000 students was preparing for Corpus Christi tomorrow.  They were decorating the entire campus in red and white.  We met the principal in addition to several of the teachers.  It is the only school with secondary classes that we have seen that is coed.  The majority of the students at this school are from upper class families who can afford to pay tuition although there are some spots and scholarships for children coming from impoverished families. 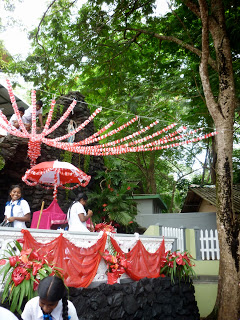 After this visit, we headed back for lunch.  It was only 2pm!  We had a short lunch with Bro. Denzil and Bro. Damian, then we had some time to rest for a moment.  At 3:30pm, We went to converse with a class of lawyers, interested in perfecting their English, particularly pronunciation.  We learned so much from them about Sri Lanka.  I tried to tell stories, as I believe that when you can laugh at someone else’s jokes and follow story threads, you are doing quite well in a language.  Because of our stories, which ran the gamut from educational histories, stories of how people met their partners, to phobias and zombies, the lawyers were so sweet as to offer to take us to lunch upon our return.  Brother Augustine also gave us a lovely gift for our time of local coasters.

After we left then at close to 5pm, we had another rest before evening prayers with the Brothers at 7:30 (today the central emphasis was on vocations with the service primarily lead by the local aspirates) and then we were off to dinner with Bro. Denzil and Bro. Damian at the local food court.  At lunch, I translated (very badly, I am a horrible translator) a letter from the Council of Bishops in Spain, which has appointed 10,000 Euros to complete the facilities at the Provicialate for elderly Brothers.  There was much to celebrate! Throughout dinner, I found myself reminding Bro. Damian of the need for him to write his book.  Perhaps I will have time to write about Bro. Damian more tomorrow.  I was so impressed with him today.  I even thought that, should I ever have a child and a son that Joseph Paul Damian (his full name) would be a good name for him.  That’s how moved I was by his good work and willing spirit.

Before that though, at one point, Bro. Damian told the story of someone asking him what his favorite hobby was.  His response:  to love others.  I saw that so fully today.  What a wonderful hobby to have!